Visit the Florence Nightingale Museum and meet Mary Seacole to discover more about her exciting life and how she helped soldiers during the Crimean War. She lived in Jamaica as a Doctress and then travelled all the way to the Crimea to use her skills helping the wounded soldiers. In 2004 she was voted the greatest Black Briton.

Performance times can be found on the Museum’s website 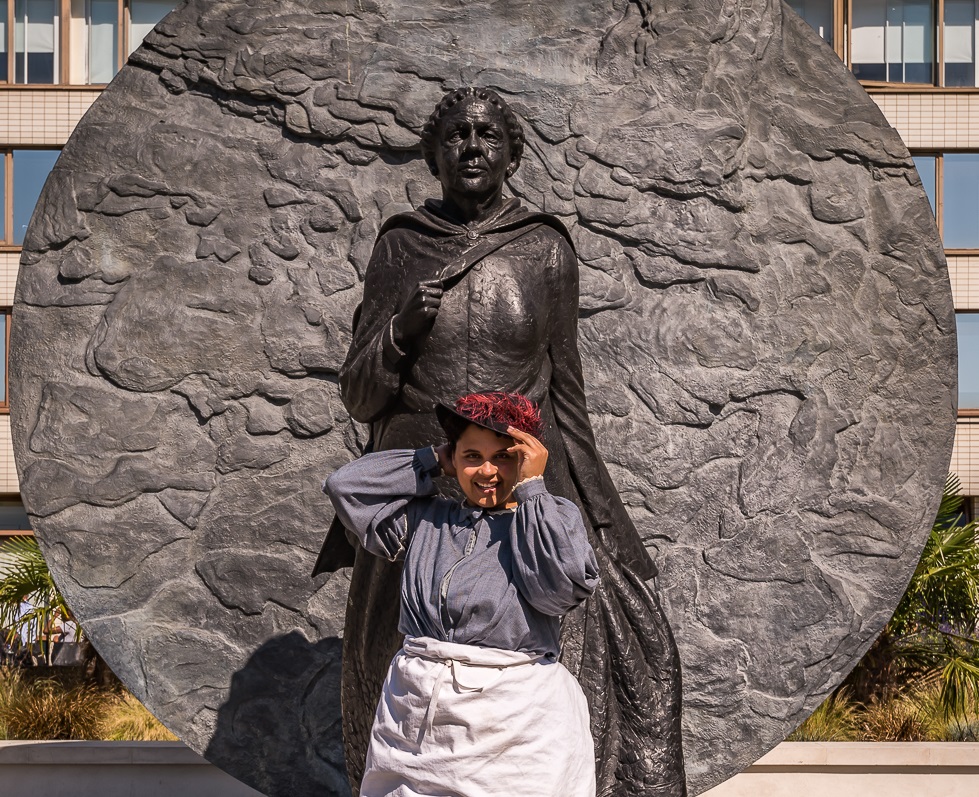 The Mary Seacole Trust has partnered with the Florence Nightingale Museum to create a theatre door showcasing Mary Seacole in her British Hotel. The door forms an evocative backdrop for a professional story teller, who entertains guests with fascinating tales of Mary’s travels through many lands including her journey to the Crimea where she helped British soldiers.

Young members of the audience are then invited to view samples of plants and herbs that Mary is likely to have carried in her medicine bag.

The exhibition has been funded by the Trust’s Education Programme through a legacy grant awarded to the Trust by the Guy’s and St Thomas’ Charity.

Q and A with Hajra Williams from the Florence Nightingale Museum

How did the museum arrive at the concept for the doors?

The project to develop and install a new interpretation in connection with Mary Seacole at the Florence Nightingale Museum (FNM) came from the desire of two organisations to raise awareness about the importance of Mary’s life and work. FNM wanted more of a presence for Mary within their displays and the Mary Seacole Trust wanted to raise awareness of Mary’s story to inspire people.

Generous funding from Guy’s and St Thomas’ NHS Foundation Trust enabled the project to take shape. The grant was in place and an exhibition build company, Scena, had been appointed by November 2016. However, the original plan was to move the existing interpretation, a film and herb drawers relating to Mary, to another area and add a text panel and graphic image.

Hajra Williams, acting FNM Perseverance and Learning Manager, arrived at the Museum in January 2017 to take up a temporary role. Hajra has a background in interpretation planning having completed significant gallery interpretation projects at the Victoria and Albert Museum, including the jewellery gallery and the furniture gallery. As Hajra’s interest and experience also includes working with communities, she ensured that the Mary Seacole Trust’s views were represented within the museum; there was an understanding of the importance of representing Mary authentically.

Having a dual role, Hajra also worked to ensure that the museums’ interests would be maximised and was keen on finding a solution that would fit within the existing interpretation but could be tailored to Mary’s story and be significant and lasting.

When the new museum was opened in 2010, part of the display included a double door set into the gallery wall – when opened this provides a backdrop simulation of Florence Nightingale’s drawing room in front of which a costumed actress dressed as Florence Nightingale could perform. These performances were developed into a successful Key Stage 1 schools programme, ‘Meet Miss Nightingale’.

In the existing scheme, Mary Seacole performances also took place in front of the Nightingale doors. As this was not an accurate representation, Hajra felt a ‘theatre’ door, contextualising Mary within the Crimea, would do her story justice. A suitable space needed to be found within the display and an appropriate image needed to be located. Both these issues seem at first to be quite straightforward, but the museum space is very small and restrictive.

There were health and safety issues to be overcome as well as ensuring there was enough space for groups to gather in front of the display. The door had to be in the Crimean area to fit in with Mary’s story. Restrictions of space led to the development of a single door rather than a double door. As the project progressed, Hajra, as manager of the learning programme, developed plans to make Mary a significant part of the Key Stage 1 programme.

Who was the designer and how were they chosen to carry out the work?

Hajra designed the concept and developed the mock-up of the door including cropping the image and testing the artwork. The artwork was printed by Displayways, a graphics company. Scena, the building contractors who built the current museum displays, were contracted to install the Mary Seacole door.

What did the process involve?

After the initial concept was developed and testing of the image had been completed, it was relatively straightforward to develop the display. The initial installation was completed over three days, with work starting in the late afternoon and continuing to late evening to ensure that there was little disruption to the museum and its visitors. Lighting and final
completion took a further two days. All work was carried out during the summer holidays so as not to disrupt the Key Stage 1 schools programme.

Can you describe the scene presented, within the context of Mary’s work in the Crimea?

‘The Meeting of Mary Seacole and Alexis Soyer,’ 1855 (engraving) is an original image by Julian Porch, an artist with the Illustrated London News. It was probably drawn from life or from sketches that were done from life as the artist was working in the Crimea in 1855. The scene shows Mary and the cook Alexis meeting in her British Hotel near the battlefield.

This image is important as it shows Mary in context and helps audiences realise the British Hotel as a real place – we hear so many stories about the British Hotel but with so few images it can be difficult to tell Mary’s story – something tangible like this image is an asset to the museum.

What are you hoping that children and other visitors will take from the installation?

The museum is undoubtedly a museum on Florence Nightingale and tells the story of her life and how nursing as a profession developed through her work. However, people and their histories do not take place in a vacuum. We felt it was extremely important to tell Mary’s story as part of the story of Crimea and thereby give our visitors another lens
to look through. She was highly unusual in her achievements for the time and it is important to acknowledge and celebrate that. People of colour should be represented in our national institutions to tell the story of the part they played in Britain’s
history.

Mary’s story, told well and told accurately enriches the museum visitors’ experience and adds to their understanding of all sorts of issues – just looking at the door, you can see the soldiers’ daily life, relaxing and resting, the kinds of objects that were in use at the time, the warm regard they had for Mary and Alexis Soyer. By examining the image on the door, visitors can see for themselves that a place like the British Hotel actually existed and helps them to extend their imagination to other aspects of the time.

How is it being received so far?

The interpretation is being very well received. Schools sessions in particular have been a
great success – many of our schools are culturally diverse, so to see a Black and Minority Ethnic figure such as Mary within a museum display is extremely positive for them.

The interpretation will continue to be used for the Key Stage 1 programme as part of the ‘Meet Miss Nightingale’ sessions. There is a desire to develop further specific Mary Seacole sessions if there is a demand from schools. Mary Seacole sessions will take place for families during holiday periods. The installation has been designed to be ‘used’ in order for the story to be told. A costumed interpreter or storyteller needs to perform to ‘activate’ the interpretation but there is a potential for a small text panel to be developed for display beside the interpretation for periods of time when it is not in use.